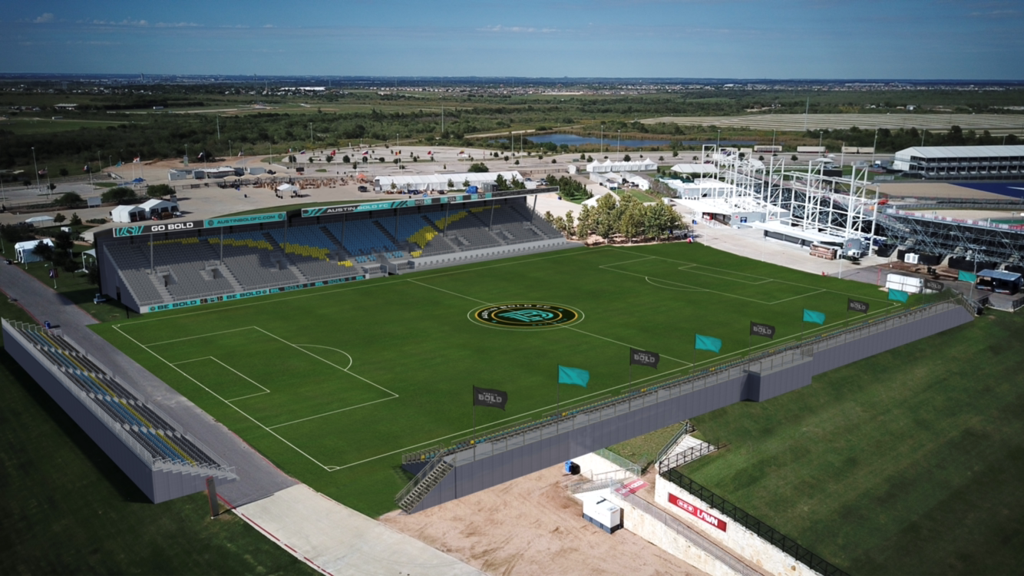 AUSTIN, Texas – Austin Bold FC, Austin’s locally-owned professional soccer team, is on its way to making a purpose-built pro soccer stadium a reality in Austin. The stadium has been engineered with the soccer fan and soccer player in mind and is sure to fire-up fans ahead of the Bold’s inaugural Spring 2019 season.

The 5,000+ seat Bold Stadium will be located adjacent to the Grand Plaza at Circuit of The Americas (COTA), the premier destination for entertainment and motorsports in the United States. By locating its stadium in the heart of COTA, Austin Bold FC can take advantage of existing infrastructure and amenities such as parking and concessions. That means the $5 million stadium construction cost can be invested directly into the stadium itself, with a focus on creating a quality experience for both the fans and the players. The entire construction cost is privately financed by local ownership.

Bold Stadium will include a covered grandstand designed and positioned so that at kick-off most fans will be seated in the shade. There will be no bleachers — all seats will be individual chairs with chairbacks. Home and Visitor locker rooms will be located under the stands with the players’ entrance to the pitch designed for maximum excitement for fans and players alike. Austin Bold FC’s 21+ fans can also choose from one of 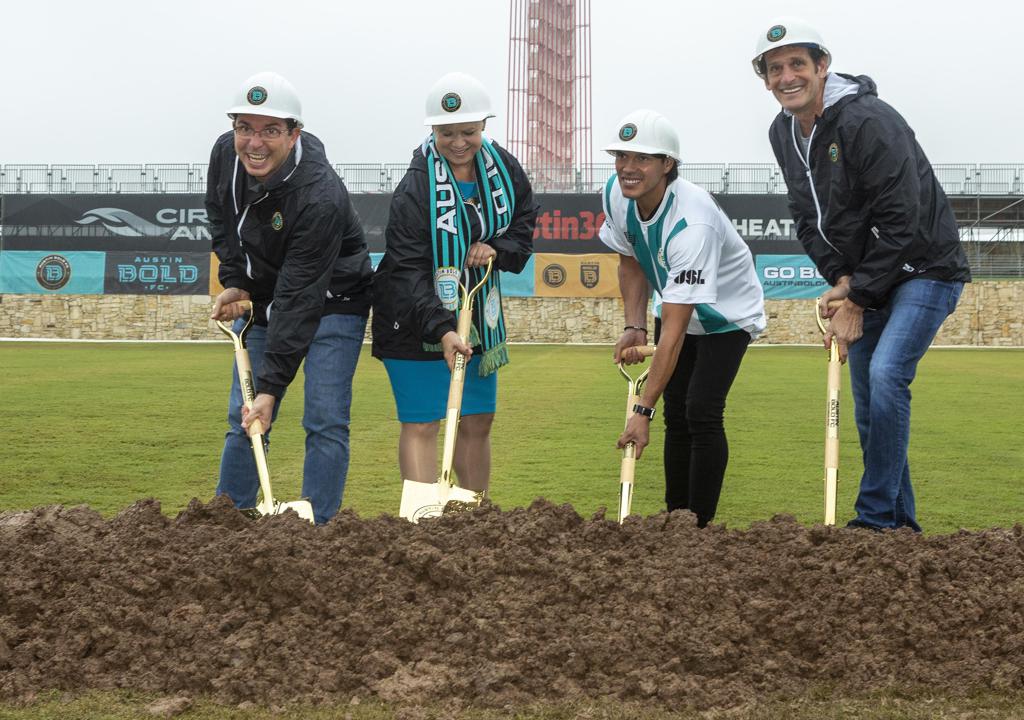 60 bar-style stadium seats, complete with bar stools and a table-top drink rail, all located next to a concession stand.

The pitch itself will be world-class featuring a top-of-the-line and multi-layered drainage system, premium root layer, and computerized irrigation system. The turf will consist of two types of grasses. The pitch will initially be seeded with cool season grasses which will be the primary turf during the early season games. As winter breaks, and the temperatures rise, it will be overseeded with Bermuda grass which is heat tolerant and perfectly suited for the local climate.

“The Austin soccer community is passionate about the sport, and we’re committed to building a stadium and offering a fan experience that’s exciting, enjoyable and affordable for families and close to the action,” said Bobby Epstein, Chairman of Austin Bold FC. “We’ve also gone to great lengths on the technical design and quality of the field we’re installing. This will be a premier pitch, where veteran players and future stars alike will want to compete.”

Prior to arriving in Austin, Báez spent 11 seasons with four clubs in Liga MX, the top division of the Mexican football system, including six seasons with Club Deportivo Guadalajara. In 205 matches with Chivas, the defensive midfielder scored 11 goals and registered 16 assists.

The native of Reynosa, Tamaulipas, Mexico spent his youth career with the C.D. Guadalajara Reserves and Academy before moving to the Chivas senior club in 2007. While with Chivas, Báez was a member of the 2009 InterLiga Championship team and the 2010 Copa Libertadores de América runner-up squad.

After a loan to Deportivo Toluca FC in 2013, he moved to Cruz Azul for the 2014-15 season, helping the club to a fourth-place result in the 2014 FIFA Club World Cup in Morocco, before starting a two-year run with Club Necaxa in 2016. In 350 career matches, Báez has netted 12 goals with 23 assists.

“We’re intentionally assembling a team with a mix of veterans and rising stars, so fans can cheer for players they already know, and players that everyone will know in the future. It also allows us to have our experienced players mentor the younger ones and create an up-tempo style of offense with plenty of scoring and excitement,” Silva said.

“Austin Bold FC is well on its way to having a talented side and fantastic stadium that we’re confident will take the USL Championship, and the soccer world, by storm,” said USL CEO Alec Papadakis. “Austin is a dynamic and thriving city and we look forward to an exciting inaugural season there this spring.”

Learn more about Austin Bold FC at https://www.austinboldfc.com. For more information on Circuit of The Americas visit http://www.circuitoftheamericas.com/.

Founded in 2018, Austin Bold FC is an American professional soccer team based in the capital of Texas. Austin Bold FC will compete in the United Soccer League (USL) Championship, a Division II sanctioned league in the U.S. Soccer Federation hierarchy comprised of more than 30 teams in the United States and Canada. Led by head coach Marcelo Serrano, the club’s inaugural season will kick off in March 2019. Austin Bold FC is devoted to growing soccer in Central Texas and forming bonds with youth leagues and soccer supporters throughout the region. Austin Bold FC will play an exciting, up-tempo style of soccer, delivering a matchday atmosphere as dynamic as the city of Austin itself.

The United Soccer League (USL) is the largest professional soccer organization in North America, possessing nearly a decade of experience in bringing the world’s game to communities across the United States and Canada. Overseeing the USL Championship, USL League One, and USL League Two, the organization is built on a proven and recognized model in international football and counts more than 100 clubs in its membership.

Based in Tampa, Fla., the USL has grown over the past decade into a model organization with strong corporate partnerships, stable organizational leadership, and a dedicated staff that provides outstanding support to member clubs and outside partners. Sanctioned by the U.S. Soccer Federation and Canadian Soccer Association, the USL is #UnitedForSoccer, moving the game forward in the United States and Canada.

The USL Championship is one of the most successful professional soccer leagues in the world, reaching a population of more than 84 million across more than 35 markets in 2019, and fueling the growth of the game across North America. At its core, the Championship is community. It’s the commitment of passionate and financially secure owners and talented players to embrace their hometowns, to create opportunity and to grow together through the beautiful game.

Circuit of The Americas in Austin, Texas, is the only purpose-built Grand Prix facility in the United States designed for all classes of racing. The 3.4-mile racetrack hosts the world’s most prestigious sporting events, including Formula 1 United States Grand Prix, MotoGP Red Bull Grand Prix of The Americas, FIA World Rallycross Championship, as well as world-renowned concerts, music festivals, and opportunities for track rentals. The 1,500-acre campus is also home to the award-winning Austin360 Amphitheater, driving experiences including COTA Karting, open-wheel Formula America and the Audi Driving Experience, expansive meeting and hospitality spaces and an iconic 25-story observation tower that offers 360-degree views of the circuit, amphitheater and downtown Austin. For more information and to download videos and photos, visit www.thecircuit.com. For an experience as unique as Austin and a rush you’ll never forget, visit Circuit of The Americas, where exhilaration happens.