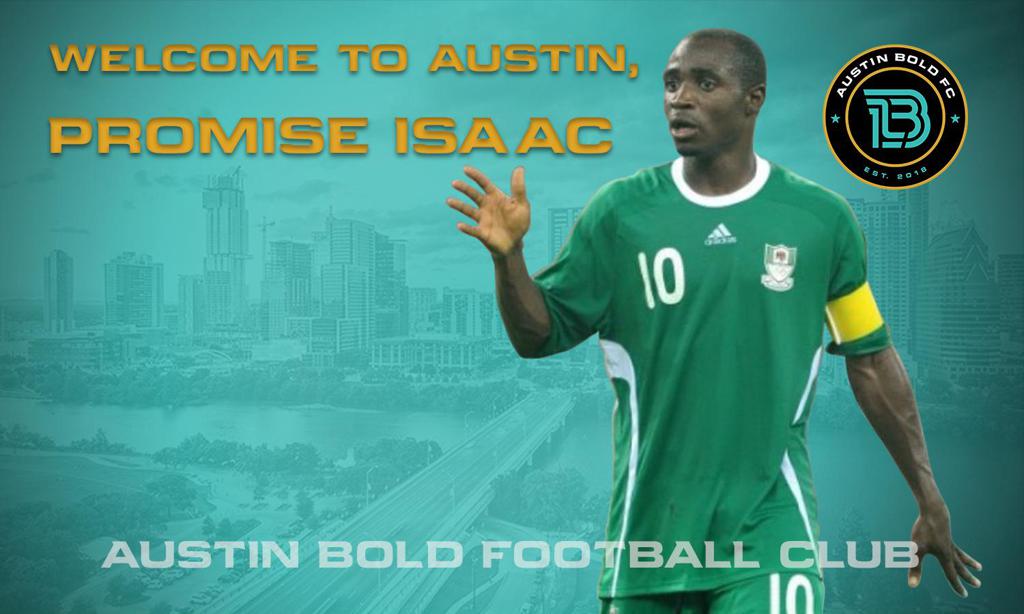 Isaac joins Austin Bold FC after previously spending 11 seasons with seven clubs in the Turkish Süper Lig and TFF First League and a season with Al-Ahli Saudi FC in the Saudi Professional League, the top division in Saudi Arabia. In his 12 seasons in Turkey and Saudi Arabia, Isaac appeared in 355 matches and scored 79 goals.

“Promise is very explosive with the ball near the box, but also likes to hold the ball and play a possession game,” said Austin Bold FC head coach Marcelo Serrano. “He has international and national team experience and brings quality play to the club.”

Originally from Zaria, Nigeria, the 30-year-old has appeared in three matches and netted a goal for the Nigerian senior national team. In the 2005 FIFA World Youth Championship (now the FIFA U-20 World Cup) in the Netherlands, Isaac served as captain for the Nigerian U-20 team, scoring once in six matches and helping guide the squad to the final.

Isaac earned a silver medal in the 2008 Summer Olympics in Beijing, appearing in all six matches for the Nigerian U-23 team and starting and serving as captain in four matches, including the gold medal match. The forward scored the opening goal in Nigeria’s 2-1 victory over the United States during the group stage.

After securing permanent residency in the United States, Isaac played for Georgia Revolution FC of the National Premier Soccer League. In the 2018 season with the Revolution, the forward appeared in 13 matches, scoring seven goals and adding an assist in 923 minutes of play.

With the addition of Isaac, Austin Bold FC has announced a total of six players (Faris Abdi, Edson Braafheid, Kléber The Gladiator, Marcelo Saragosa, Valeri Saramutin) for the 2019 inaugural season. The club will announce additional player signings in the coming weeks.