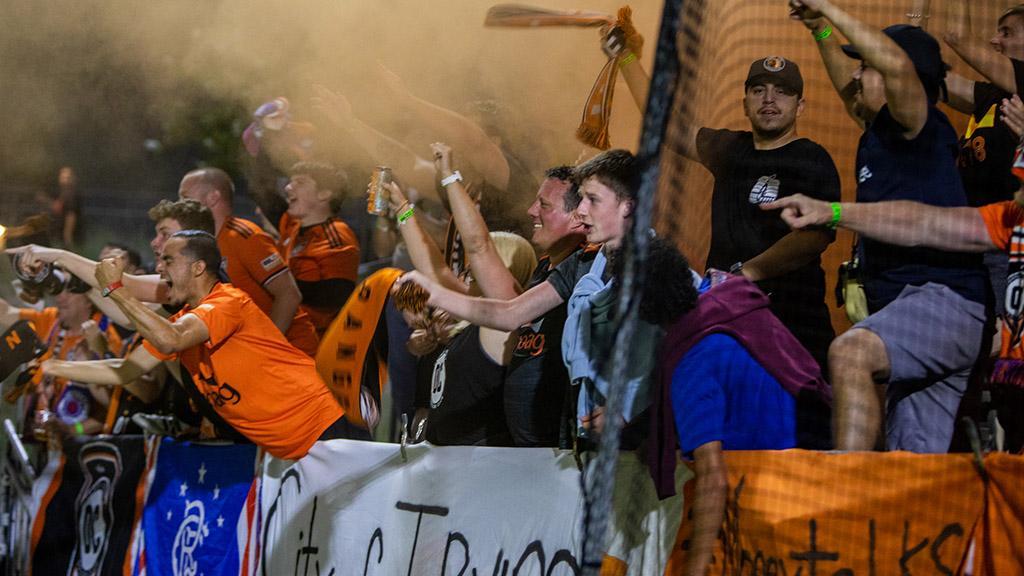 Clubs, fans, and supporters’ groups from around the country rallied around Orange County SC on social media in recent days, backing the 2021 USL Championship title winners against a surprise takeover bid for their longtime home of Championship Soccer Stadium in Orange County’s Great Park.

Championship Soccer Stadium has been OCSC’s home since it opened in 2017, having twice hosted the Western Conference Final in the USL Championship Playoffs. That tenure is now under threat from a proposal to the City of Irvine that would make the LA Galaxy II the exclusive regular tenant at the venue starting in 2023 when it begins competing in MLS Next Pro.

Reaction from both the local community and the broader soccer community across the United States arrived swiftly on social media, with fans from numerous clubs - including the Galaxy's own - voicing their opposition to the potential move.

Everyone help to #KeepTheGreatParkOC . @orangecountysc and the fans deserve to stay in their home! https://t.co/WZIqYEL1G7

I don’t know why we are kicking a club out of their stadium. https://t.co/l8iPOfvw9r

Galaxy doing their best to remind people they are not a team that represents Los Angeles. #LAFC https://t.co/SfcQ4PJ47D

Not many will even go to Irvine to watch #LosDos.

Outrageous news that @LAGalaxy are trying to persuade @City_of_Irvine to kick out all of OC’s professional soccer teams so that they can use the stadium solely for their reserve team - ending future of any men’s & women’s team in OC.@USLChampionship @DevonKerr9 @vandey01 https://t.co/KydDiMbXwG

Absurd that the @LAGalaxy reserve team that does not allow fans at their matches would try to force the defending USL Champs out of their great venue. Let’s hope the city of Irvine sees through this is and supports @orangecountysc #supportlocalsoccer https://t.co/p5xNbDdhs0

“We love Orange County Soccer Club playing in the Great Park,” OCSC President Daniel Rutstein told Angels on Parade’s Alicia Rodriguez. “We love that stadium, are fans of that stadium. We want to keep playing there and that has been something that we’ve been talking about with the city, on and off frankly since we moved there, but with a lot more urgency over the past year as following our [league title] victory the club started growing, the number of fans go[ing] there and just trying to do more with the stadium. As we build our club, we build our brand, and we build our community in Orange County.”

Over the past eight years under the ownership of James Keston, Orange County has become one of Championship’s top clubs not only competitively but in talent development. This year alone it has transferred a pair of players – 2021 USL Championship Final MVP Ronaldo Damus and United States U-20 international Kobi Henry – to top-flight clubs in Europe, offering a competitive pathway for players through the USL Championship.

The on-field quality the club has produced its on-field success has seen OCSC’s average attendance top 4,000 fans per game in recent seasons, with the club welcoming 4,068 fans to this past Saturday’s thrilling 3-3 draw against Colorado Springs Switchbacks FC. The side has also been active in the Orange County community, helping build relationships with businesses and local programs that have made the club a strong community partner.

“OCSC is a model professional sports organization that provides a world-class soccer experience for its players and fans and has a real impact on its local community” said USL President Jake Edwards. “The club has won trophies and is recognized throughout global soccer for its player development. Orange Country SC’s home is – and should remain – Championship Soccer Stadium.”

Options for Championship Soccer Stadium are scheduled to be discussed on Tuesday at 4 p.m. PT during a City of Irvine council hearing, with the club encouraging fans to make their voices heard both at the meeting and online.

We need your support here in Orange County!! @LAGalaxy is trying to take over our home and @City_of_Irvine is considering it. Please leave a supportive comment about allowing @orangecountysc to keep our home field! #orangecounty #usl #uslchampions #soccer #uslsoccer https://t.co/yiWDLX06aL

So the Galaxy want to kick out an already established team from their home for Los Dos to take over? This is a low blow to American soccer and the fans. If Galaxy gets away with this, who's to say that any other team can't do the same in another market? https://t.co/kRb6UfFicJ

@herculezg @SebiSalazarFUT As an LA Galaxy supporter this is a really shameful thing the team is trying to do. Muscling out lower division teams and monopolizing pro soccer in the US is a tactic by MLS to control market share which harms access to the game. #FutbolAmericas

MLS bullying a USL champion out of their stadium seems an awful lot like the direct competition for markets they promised would never happen and deserves more coverage. https://t.co/QdqXbbco2A

Can the Galaxy just leave Irvine alone. OCSC has cultivated a great atmosphere and community feeling. The USL and lower leagues are integral in the US soccer landscape. https://t.co/vJKr1L9QJz

Please get on this and rebroadcast, @SacRepublicFC. The guys down at @orangecountysc have done it right and don't deserve to be bigfooted by the Los Angeles Galaxy of Carson (soon also to be of Irvine) https://t.co/Px7zqOzRXq

Not a fan of this as a Galaxy fan, dont support this at all https://t.co/59ljAJPVRt

I know the pain that #Crew96 supporters went through when our team almost didn’t exist. Soccer brings people together, and shouldn’t just be “evicted” because someone with more money comes and wants something. https://t.co/MKDLRwoHG3

(1/2) Hey @City_of_Irvine, you have a great team representing your community. @orangecountysc just won a USL Championship LAST YEAR, & brings >2,000 fans to most games

Don’t throw that away for a MLS reserve team. LA Galaxy doesn’t care about your city or community https://t.co/S8ySJeqLME

It's disheartening to see a community club like Orange County SC being forced out of their home. We have to see the growth of beyond MLS, it includes the smaller communities. Going to be following this with interest. https://t.co/qdiAI63Iuz

There's absolutely no reason why this needs to happen. Our facilities alone can house multiple teams all at once. Leave OCSC alone and instead force #KleinOut https://t.co/8G36vCu3xJ

Extraordinary to see the support being expressed here.
Our home stadium is under threat and our fans have been immense already - as have those of @LAFC and even @SanDiegoLoyal.
Football brings fans together like nothing else. https://t.co/pTSHOM1On7