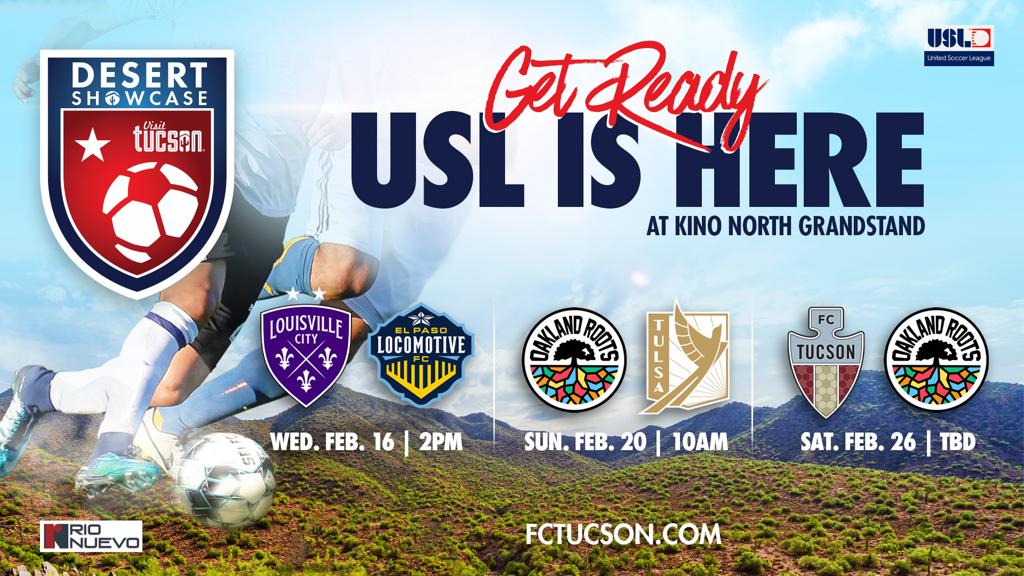 Locomotive FC and LouCity will square off at Kino North Stadium on Wednesday, February 16, while Oakland Roots SC will face both FC Tulsa on Sunday, February 20 and hosts FC Tucson on Saturday, February 26 in preparation for the upcoming 2022 USL Championship season.

“For more than a decade, FC Tucson has hosted top professional soccer teams across the country to train and play in Southern Arizona,” said FC Tucson President Amanda Powers. “The USL is one of the fastest growing leagues in the world and the talent level on the rosters has grown exponentially. We are proud to be part of the league and excited to have some of the top clubs in USL as part of the Desert Showcase presented by Visit Tucson. These are five premier clubs in the league, and this is a fantastic opportunity for soccer fans in the region.”

All four Championship clubs are coming off appearances in the 2021 USL Championship Playoffs and will train and play preseason events in Tucson in February.

El Paso Locomotive FC won the Mountain Division this past season, going through its home slate undefeated at Southwest University Park in the regular season. FC Tulsa has advanced to the postseason in each of the past two seasons. Louisville City FC, the 2017 and ‘18 Championship title-winners, won the Central Division and advanced to the Eastern Conference Final in the playoffs for the seventh consecutive season, while Oakland Roots SC qualified for the playoffs in its inaugural season in the USL Championship.