From a 2011 Final thriller to Mkosana’s miracle for Rowdies, the league’s postseason history has seen its fair share of drama 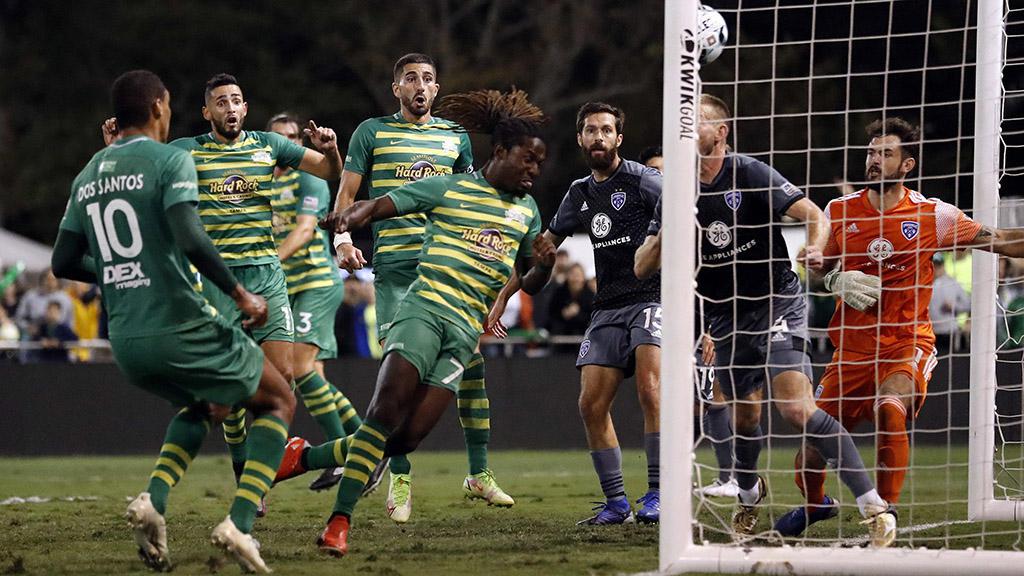 From the league’s inaugural season, the USL Championship Playoffs have produced thrills, upsets and drama and this year’s edition has been no different.

Saturday’s night comeback victory by the Tampa Bay Rowdies against Louisville City FC, aided by Lucky Mkosana’s goal in the sixth minute of second-half stoppage time, was the latest to join the pantheon of thrilling stoppage time moments in the league’s postseason history as his goal sent the game to extra time, where Steevan Dos Santos lifted the Rowdies to victory.

We’ve put together five of the best dramatic endings in the Championship Playoffs’ history, highlighting the excitement the postseason has come to represent over the league’s history.

The first USL Championship Final remains arguably its most dramatic as a highly favored Orlando City SC took on the Harrisburg City Islanders, who had ended the season with the fifth-most points in the campaign but earned a place in the Final with a road upset of the Rochester Rhinos the prior round.

After a scoreless first half, the game appeared it might tilt Harrisburg’s way in the 48th minute when Orlando goalkeeper Miguel Gallardo was sent off for denial of a goalscoring opportunity. Nonetheless, the hosts took an 89th minute lead through Lawrence Olum and appeared to be set for victory until in the fifth minute of second-half stoppage time, J.T. Noone stabbed home from close range after a corner kick was headed down to the top of the six-yard area to send the game to extra time.

The City Islanders then took the lead five minutes into the extra 30 minutes as Sainey Touray found the net, but with four minutes remaining in the second period of extra time the Lions were awarded a penalty kick that Lewis Neal stepped up to score. The game ended in a penalty shootout where Orlando back-up goalkeeper Sean Kelley proved the hero, saving from Harrisburg’s Nelson Beccera and Jose Angulo in the opening two rounds. The City Islanders got back on level terms through four rounds, however, as Noone and Stephen Basso both converted after Orlando misses, but after Touray shot wide to open the fifth round for the visitors, Devorn Jorsling clinched the title for the Lions to end a wild contest.

As the first signing in Sacramento Republic FC’s history, Rodrigo Lopez had already achieved hero status for the crowds at what was then known as Bonney Field in the club’s inaugural season, but his postseason performance against the LA Galaxy II – which entered as the No. 3 seed in the playoffs in its first year to Republic FC’s No. 2 seed – made him a club legend forever.

Los Dos gained the upper hand in the first half as forward Charlie Rugg scored twice, first in the 26th minute and then a minute before the halftime break to put the visitors well in control. Sacramento tried to find a way back in the second half and were given a lifeline with 20 minutes remaining in the form of a penalty kick that Lopez calmly converted. Then with six minutes remaining, a cross from the right by Emrah Klimenta deflected off a defender’s arm in the penalty area to give Lopez a chance to level, which he sent down the middle of the net.

The contest could have gone from there to extra time, but Lopez decided otherwise. In second-half stoppage time the hosts were awarded a free kick to the right of center, 25 yards from goal. Lopez stepped up and delivered a perfect right-footed shot over the wall and into the top-right corner of the net to complete the comeback for the eventual title-winners in what would become known as the Miracle at Bonney.

Scoring one goal in second-half stoppage time to earn your side extra time or a victory is one thing. Scoring two in two stoppage-time minutes to rally your side from a one-goal deficit to advancement in the postseason is quite another, but that’s what Colin Bonner accomplished in one of the most dramatic turnarounds you could ever see.

Rio Grande Valley entered as the No. 2 seed in the Western Conference and for much of the game it appeared they would hold the upper hand on No. 7 seed Energy FC. The Toros took the lead through Ruben Luna in the 33rd minute, and then after Energy FC equalized with 17 minutes to go through Linus Olsson, RGVFC regained the lead three minutes later as Eric Bird found the bottom-left corner from outside the penalty area.

Brought on as a substitute with 20 minutes to go, however, Bonner turned the game in stoppage time. Using a long flip throw-in by Michael Harris to launch the ball toward the penalty area from almost the halfway line, a big first bounce fooled the Toros defense and allowed Bonner to head in as the goalkeeper came off his line to pressure. A minute later, the visitors won a corner kick that was delivered to the near post, where Bonner met it with a glancing header into the top-right corner of the net, leaving the hosts stunned and Energy FC in the Western Conference Semifinals.

The Louisville Indianapolis Proximity Association Football Contest had seen some notable prior editions both in the league and the Lamar Hunt U.S. Open Cup, but the second playoff meeting between Eastern Conference No. 3 seed Indy Eleven and No. 4 seed Louisville City FC provided a twist in the tail that sent the game to extra time where LouCity earned a third consecutive trip to the USL Championship Final.

Neither side found a breakthrough at Michael A. Carroll Stadium in the opening half, but Indy grabbed the lead midway through the second stanza when standout forward Tyler Pasher got into space on a lifted through-ball and shot home to the left corner from the top of the penalty area. It appeared that might serve as the only goal of the game, but in the fourth minute of second-half stoppage time a corner kick from the left took a deflection at the near post and came to LouCity’s Antoine Hoppenot, whose first-time finish on the half-volley arrowed through the players in front of him and into the net.

LouCity then took the lead four minutes into extra time when Magnus Rasmussen shot home from 12 yards into the right corner. With seven minutes remaining Luke Spencer converted from the penalty spot to ice the game for the visitors, sending home a large contingent of traveling support home happy.

The Tampa Bay Rowdies had built a 10-game undefeated streak across the regular season and playoffs on their home turf at Al Lang Stadium while equaling the Championship’s regular season record for most home wins in a regular season with 13 when Louisville City FC arrived for a highly anticipated rematch from the prior year’s Eastern Conference Final.

A sellout crowd of 7,210 fans notwithstanding, LouCity took the lead in the 10th minute when Brian Ownby scored the seventh postseason goal of his career off a free kick by Oscar Jimenez and then doubled the advantage in the 26th minute when stalwart Rowdies defender Forrest Lasso inadvertently turned a low cross by Paolo DelPiccolo into his own net.

The Rowdies began to turn the game in the second half with the introduction of Steevan Dos Santos, however, which saw the hosts begin to create more chances to find a way back. The key addition, though, proved to be Lucky Mkosana, who added to his legend with the Rowdies in the postseason with the first goal for the hosts with seven minutes to go in regulation. That was one goal back, and as it seemed time might run out on Tampa Bay in second-half stoppage time Mkosana pulled an equalizer out of the fire in the sixth minute of stoppage time, heading home from close range from Lasso’s header across the six-yard area to finish.

Tampa Bay’s momentum continued into the second half and in the 102nd minute – after Mkosana had been denied a hat trick by a goal line clearance by LouCity’s Pat McMahon – Dos Santos provided the lead as he headed home powerfully from Laurence Wyke’s cross from the right. That proved the decisive goal as the Rowdies claimed a second consecutive Eastern Conference title on a memorable night in downtown St. Petersburg.