TAMPA, Fla. – The USL Championship announced the Team of the Week Presented by Cleer Audio for Week 21 of the 2021 regular season on Tuesday, with Tampa Bay Rowdies midfielder Yann Ekra voted Player of the Week after recording two goals and two assists in his side’s 6-0 victory against the New York Red Bulls II on Saturday night at Al Lang Stadium.

One of only 10 players to have surpassed 200 regular-season appearances in the USL Championship’s history, Ekra has been a consistent figure in the league’s history and has been part of the defending Eastern Conference Title-holders lineup since arriving in 2019. On Saturday his two goals and two assists marked a career night maybe only surpassed by his lone hat trick during his first season in the league for the Harrisburg City Islanders in 2012, as he helped the Rowdies extend their current winning streak to five games to sit on top of the Atlantic Division standings.

Ekra earned 43 percent of the ballot to claim the award. The Charlotte Independence’s Irvin Parra and Miami FC’s Connor Sparrow finished tied for second on 21 percent, with Parra notching two goals and one assist in his side’s two victories over the week and Sparrow recording a nine-save shutout in Miami’s 2-0 road victory against Memphis 901 FC. 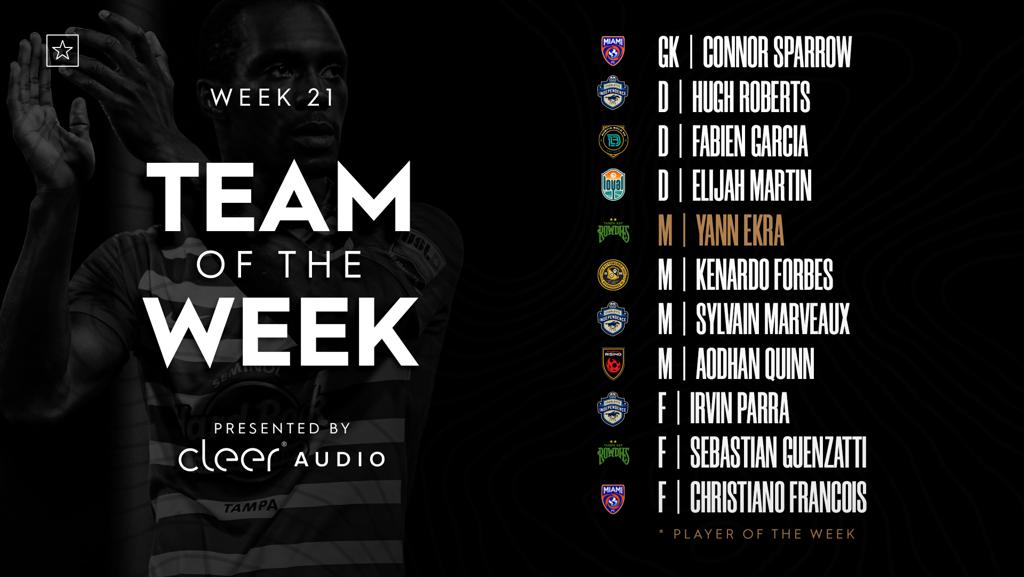 GK – Connor Sparrow, Miami FC: Connor Sparrow recorded a nine-save shutout, including eight saves coming on shots from inside the penalty area, and also notched three punched clearances as Miami FC took a 2-0 victory on the road against Memphis 901 FC.

D – Hugh Roberts, Charlotte Independence: Hugh Roberts helped lead the Independence to a pair of shutout victories over the week, recording a goal and assist in the side’s win against Loudoun United FC while winning 3 of 3 aerials and 2 of 2 tackles and making eight clearances over two games.

D – Fabien Garcia, Austin Bold FC: The French defender scored the decisive goal in Austin’s 2-1 win against San Antonio FC and over two victories won 4 of 5 tackles while making 14 recoveries and four interceptions as Austin moved into the playoff positions in the Mountain Division.

M – Aodhan Quinn, Phoenix Rising FC: Aodhan Quinn recorded a goal and assist and seven key passes overall in Phoenix’s 4-3 victory against the LA Galaxy II on Saturday night, and in turn became only the third player in Championship history to reach both 35 regular-season goals and assists in the league’s history.

F – Christiano Francois, Miami FC: The Haiti international scored both goals as Miami took victory against Memphis 901 FC at AutoZone Park and completed 2 of 2 dribbles and 14 of 22 passes as the side kept pace with its rivals at the top of the Atlantic Division.