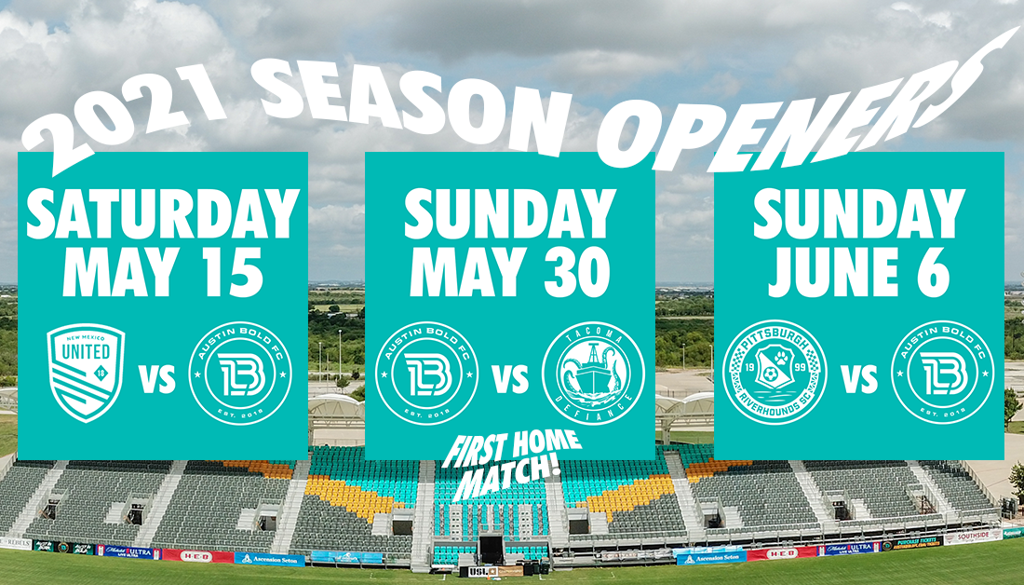 AUSTIN, TX (March 23, 2021) The USL Championship announced today its home openers for the 2021 season, with the season set to kick off on Saturday, April 24.

Austin Bold FC will begin their season on the road against Mountain Division rivals New Mexico United on Saturday, May 15, before returning home to Bold Stadium to host Tacoma Defiance on Sunday, May 30. The following week, The Bold travel to Pittsburgh, PA, to take on Pittsburgh RIverhounds SC at Highmark Stadium.

“The season starts strong against three high-quality opponents and will be an amazing opportunity to see where our level is early in the season,” said Austin Bold FC Head Coach Marcelo Serrano. “I’m looking forward to playing in front of the Bold Familia on May 30 and I hope we can give them something to cheer about in the stands.”

Austin Bold looks to gain their first win against Tacoma Defiance in the 2021 home opener after their previous matches resulted in a draw and a loss for Austin. The club will have help from The Bold Familia in the stands as they battle for all three points. In 2020, Austin was undefeated in the final three matches of the season at home once fans were safely allowed back.

The season opener between Austin Bold FC and New Mexico United at Isotopes Park will be the fourth meeting between the two clubs. New Mexico United got the better of The Bold in 2019 with a 3-1 win at Bold Stadium and a 2-2 draw in the reverse fixture. Head Coach Serrano bested New Mexico in 2020 with a 1-0 victory in the season opener at Bold Stadium. The Bold’s match against historic USL club Pittsburgh Rivershounds SC will be the first between the two clubs.

Austin Bold FC will return to Bold Stadium on May 30 to kick-off their third USL Championship Season, which includes 16 home games. Place your $25 deposit for a 2021 Season Ticket Membership to catch all the action as the upcoming unforgettable season unfolds at www.AustinBoldFC.com