TAYLOR RETURNS TO THE BOLD FOR A THIRD SEASON 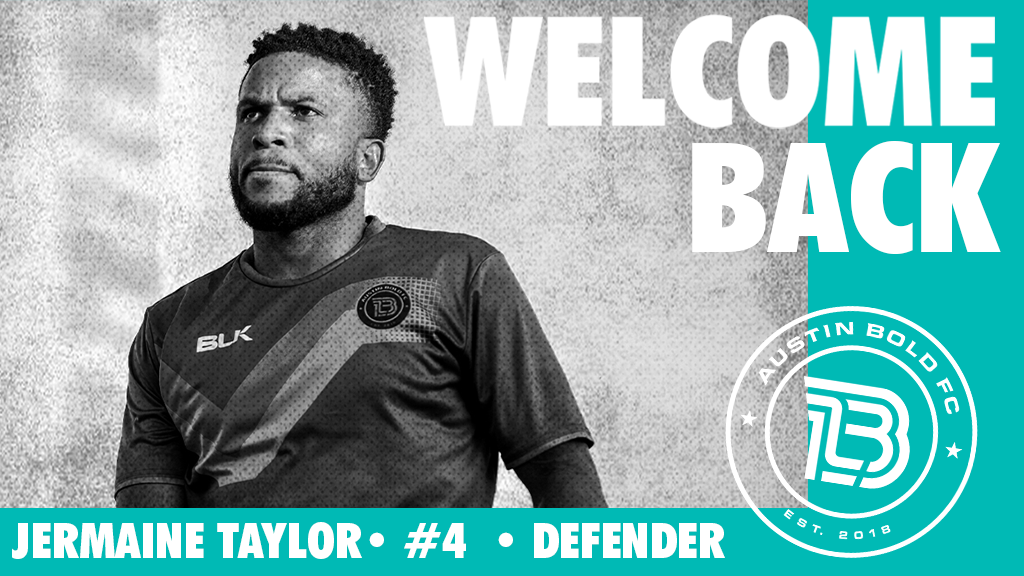 “We are very happy to resign Jermaine Taylor. He has a wealth of experience playing for the Jamaican National Team and in MLS for an extended period of time,” said Austin Bold FC Head Coach Marcelo Serrano. “ Most importantly is Jermaine’s work ethic and his dedication to the team. He always puts the team first. In the locker room, he’s one of those guys that show tremendous leadership skills and a willingness to pass on his knowledge to younger players. That’s the environment we create here and Jermaine helps in that process.”

Taylor, 36, joined Austin Bold FC ahead of the inaugural 2019 campaign. In two seasons, the experienced defender quickly became an integral part of Bold Head Coach Marcelo Serrano’s defense. Taylor appeared in over 40 matches for The Bold with 39 successful tackles, 206 clearances, and 123 interceptions. USL Championship recognized Taylor’s performances by twice selecting him to the Team of the Week bench.

“My main reason that I wanted to come back to Austin Bold FC for a third straight season is the great people in this organization from ownership to management and coaching staff. They all try to make everything possible for the club, for the city of Austin, and for the players. It makes me feel so appreciated and grateful to be here,” said Taylor. “I want to bring the USL Championship trophy to Austin in 2021 so we can all celebrate and have a good time.”

Taylor began his professional playing career with Harbour View FC of the Jamaican National Premier League at the age of 19. After eight seasons and 100 matches, Taylor joined Houston Dynamo of MLS in 2011and helped the side to consecutive MLS Eastern Conference championships. The defender also spent time with the Portland Timbers and Minnesota United FC before joining The Bold.

As the seventh-most capped player of the Jamaican National Team history, Taylor appeared in 101 matches for the Reggae Boyz and won three Caribbean Cup championships (2005, 2010, 2014).

The 2021USL Championship season will begin on or about May 1, with the teams split into four divisions, and will contain a 32-game slate running across 27 weeks through the end of October with playoffs scheduled for November. Visit www.AustinBoldFC.com for future information on tickets and matches.