GET TO KNOW LACINCO12 AND THEIR FOUNDER ROBERTO SALAZAR 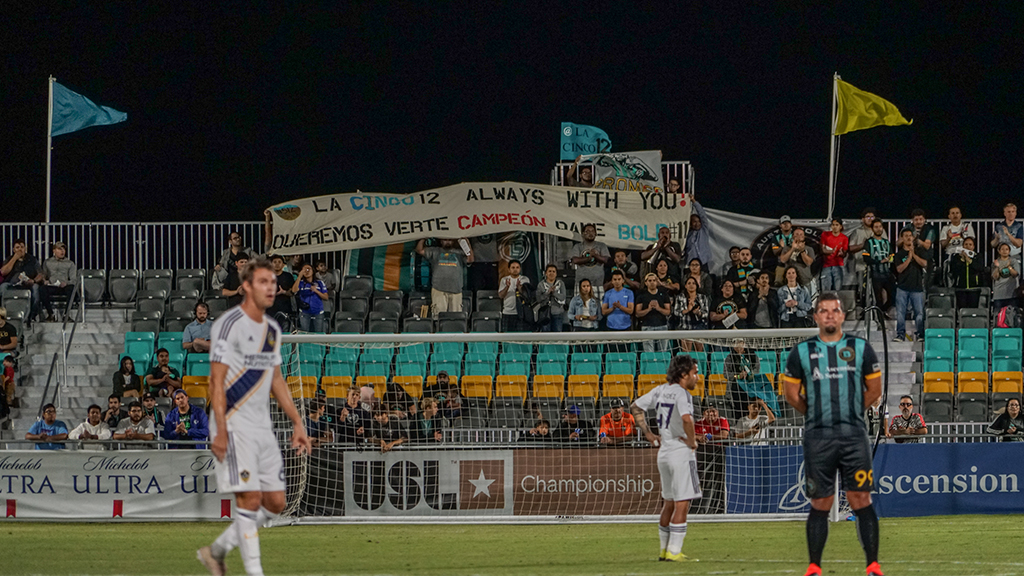 Austin, TX (April 17, 2020) Every match at Bold Stadium, you can hear them behind the goal. Banging on drums, chanting, and playing trumpets to help will the players on the field to victory. They are LaCinco12—the heartbeat of The Bold. As the official supporter group of Austin Bold FC from the beginning, LaCinco12 has been with the club for plenty of important first in franchise history. Founder Roberto Salazar answered some questions about LaCinco12’s creation, favorite moments, and plans for the future.

Hey Roberto, tell us about yourself. What do you do when you’re not at Bold Stadium?

I go to any game my son and godson are playing during the weekends.

What was it about Austin Bold FC that made you want to be a supporter?

It’s the only professional team in town. Also, they signed up local talents like Sonny, Julian, Kris, and Beto.

What was the spark that made you want to create LaCinco12?

I’ve always been active in the community when it comes to the sport. I believe the more soccer and soccer venues we have in Austin, the more opportunities for younger generations.

What are some traits you wanted to instill in the group when you were putting it together?

I  wanted to help create a homegrown support with a deep Latin America infused culture in our chants.

Which Bold game sticks out to you most in all the matches you attended?

The match against Phoenix Rising FC early in the season  where Sonny scored his first goal and jumped the fence to celebrate with our flag.

What was your experience with soccer growing up?

When I was young,I played in the street of Mexico and supported teams like Club America and Atletico de San Luis. Later fell in love again when my son started playing in Texas.  Him playing was definitely a game-changer for me. I saw that many talented players didn’t have the means to play the beautiful game. A group of passionate friends and I founded Austin Premier Academy and showed the giants that, with a quarter of the money, kids could play at the same level. I served as team manager, travel director, Vice President, and different roles during my son’s playing career. It was with the goal to one day minimize the damage the Pay to Play System does to our players.

How have you been spending your time now with no live soccer games?

I am luckily still working, but it is really hard not to have any sports. I miss the Bold games the most, especially the interaction with my Lacinco12 friends. I have worked on all the projects my wife had that I never had the time to do :)

How do you see LaCinco12 growing during the 2020 season and in future seasons?

We hope to have our section 112, now renamed to 512, filled with fans. Many of our members choose to stand directly behind the goal  and that gives the appearance that we are a little empty in our section. I will hate to take that unique experience away from our members, but it leaves the drummers alone in the stands. We hope to find a balance for that. We want to be able to sell more merchandise to be able to buy additional drums and pay to travel to more away games.

We’re very grateful for all the opportunities and gifts the club had given us, but we have even more ideas that could maybe help. We’re all busy and never have time to meet. Maybe we can do virtual meetings now that we all are used to tha.

How can someone who’s interested in being a part of LaCinco12 join?

Anyone interested in joining can contact us through our social media accounts or info@lacinco12.com.  The only requirements are to be loud and have a great time.