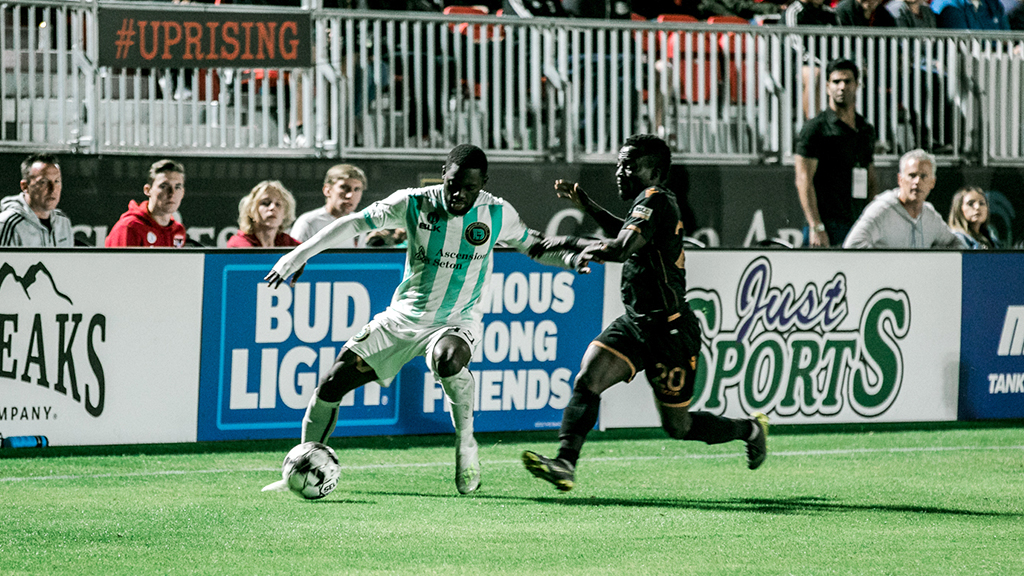 Austin, TX (October 27, 2019) Austin Bold FC finished their inaugural season in the USL Championship Western Conference Quarterfinals after falling to Phoenix Rising FC 7-8 in penalities at Casino Arizona Field. Little could separate the two sides in the first 90 minutes of the match. Rising player Adam Jahn almost opened the scoring when his header from a setpiece delivery hit the crossbar. Bold forward Ema Twumasi got close to getting the visitors on top with a one on one with Zac Lubin but couldn't convert. After extra time, the match was settled in a penalty kick shootout. Restrepo saved Kevon Lambert's attempt. Lubin stopped two of Bold penalties in nine rounds to give Phoenix the win.

Austin's Twumasi had a chance late in the first half. Edson Braafheid made a decisive pass between two Rising defenders to find a streaking Twumasi. The Bold forward was one on one with Lubin, but the Phoenix goalkeeper was able to smother out the attempt.

The two clubs couldn't be separated after 90 minutes, and the two added extra time halves. Lubin gave Phoenix the advantage with his save on Thomas de Villardi's penalty. Restrepo leveled it when he stopped Lambert from the spot. In the ninth round of penalties, Lubin got a hand to Jermaine Taylor's penalty, and A.J. Cochren converted his left footed shot to help Phoenix Rising advance to the USL Championship Western Conference semifinals.

On his feelings after the match against Pheonix Rising FC.

"I'm feeling good. We played against the team that's the sensation of the league and, in my point of view, played better than them. We had more chances. Finishing like this with missing important players, it feels good.”

Reflecting on their inaugural season and looking towards 2020.

“The first year is very hard, but now it's time to rest and celebrate the season. We did a good job, and now we can think about next year. This franchise has everything to make waves, not just on the pitch but off it as well.”

On the short turn around between Wednesday’s game against LA Galaxy II.

“Speaking to Roberto (Austin Bold FC General Manager), I said that if the players did the work before the match and executed well, we'll have a great game. I trusted the players to do that, and that's what happened. It was a great game planned and a great game executed. In this game, it felt like we were the team that could have advanced, but congratulations to Phoenix. They did amazing during the season.”

Preparing for the 2020 USL Championship Season.

“It was a good way to end the season. It's not easy. We want to keep going because of the playoff performances we've been having, but this is the soccer life. Congratulations to the players, the ownership, the front office, to the fans who were amazing at home and on the road. I think we did way more than what was expected from us, but that can't be the excuse for next year. We need to start how we finished next year, and we'll have success.”

On the match in Scottsdale against Phoenix Rising FC.

"We have mixed feelings at this moment because we were so close to advancing. Being close to beating the best team by far in the regular season and after our last result in Arizona, we are very proud.

We're very proud of this team and everyone involved from the front office to ownership and the players and coaching staff. I think what we showed today was a high-level game. It was a very exciting game. Everyone can be very proud of what we accomplished.”

On the 2019 USL Championship Season.

“We leave this season, after a full year of working hard, with our heads up. Looking forward, I know there are a lot of things we can do better next year. If we can really do those things better, I'm sure next season we can do even more.”

On the support from the Austin community.

“I would like to thank our fans for their support this season on behalf of the entire organization. We'll be back soon. We hope to see you at Bold Stadium next year."