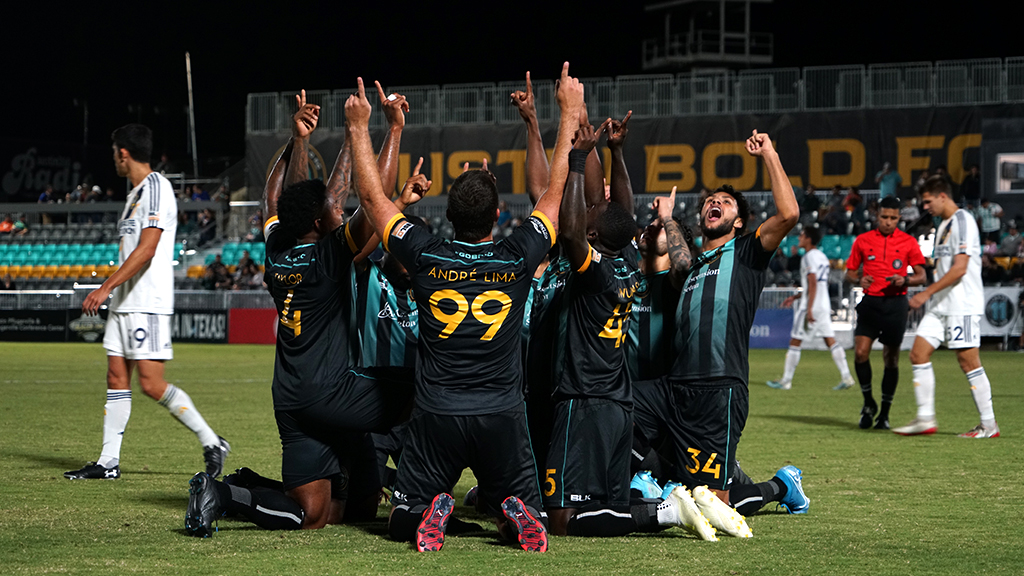 Austin, TX (October 23, 2019) Austin Bold FC advances to the USL Championship Western Conference quarterfinals with a 2-0 against LA Galaxy II at Bold Stadium. The Bold took an early lead with an Ema Twumasi goal after a fantastic Diego Restrepo pass and Xavi Baez run. Restrepo kept the home side's advantage with a quick reaction save to keep Ethan Zubak off the scoresheet. After a Los Dos defender failed to clear a corner, Sean McFarlane slotted home the second goal of the night in the second half. Austin now travels to Arizona to take on Phoenix Rising FC this Saturday.

The Bold got on the scoresheet first in the 9' with a Twumasi goal. Restrepo claimed a Galaxy freekick and found a streaking Baez on the right-wing. The Mexican midfielder drove into the box and laid it off for Twumasi to smash in a right-footed shot to the bottom right corner.

McFarlane doubled The Bold's lead in the 54'. He initially missed his header on a Baez corner kick, but the ball deflected off a Galaxy defender and landed for McFarlane. He put away a right footed shot to make it 2-0.

Austin limited Los Dos' attempts in the remaining minutes and ended the night 2-0 victors. The Bold advances to the quarterfinals where they'll play Phoenix Rising FC at Casino Arizona Field this Saturday.

After the match, Bold Head Coach Marcelo Serrano spoke about the accomplishment of winning a playoff match in an expansion year.

"Congratulations to the owner, the front office, and the coaching staff. Foremost, I would like to congratulate the players. Coming in the first year and doing what we been doing is an amazing feeling. It's not easy like everybody knows. I'm just happy about tonight. I'm happy about what we accomplished in such a short time."

Serrano also spoke on his players rising to the occasion during the postseason.

"Playoffs are the time to bring your best. In the first game in the playoffs, I feel like we did. We played a mature game. All the work we did in the regular season showed in the playoffs."