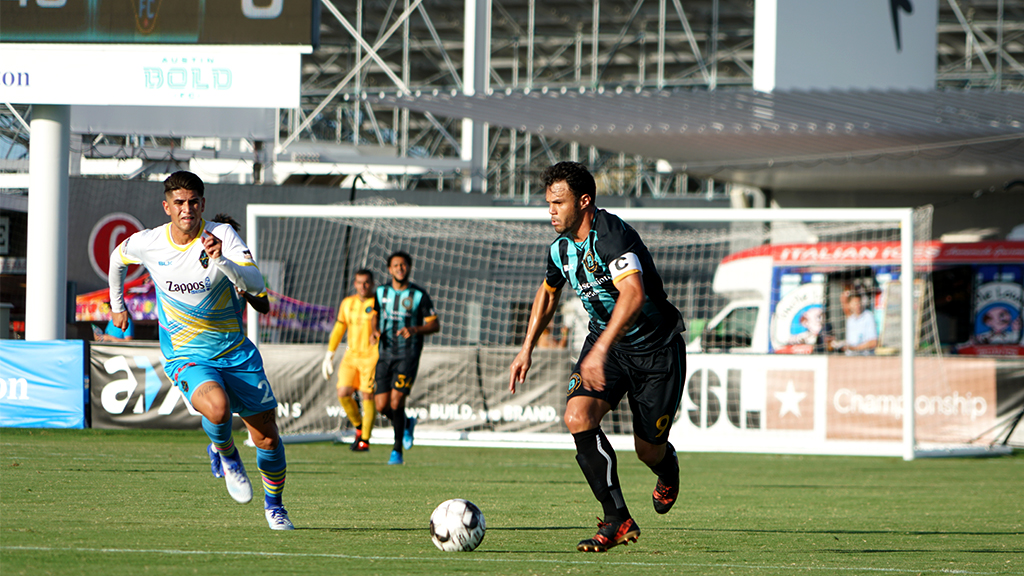 Austin, TX (September 22, 2019) Austin Bold FC defeated Las Vegas Lights FC 4-1 Sunday night in their final regular season match at Bold Stadium. The first half saw a flurry of goals from both sides. Kleber opened the scoring on the night for The Bold, but Lights striker Ferrety Sousa drew the match level two minutes later. A second goal from Kleber helped the home side enter halftime with a lead. Austin's Own added to their tally in the second half with an Andre Lima goal and a third from Kleber. Kleber's hat trick was the first at Bold Stadium in franchise history. The Bold continues to fight for a spot in the USL Championship playoffs with four consecutive away matches to finish the season.

The Bold got on the scoresheet first with a 21' goal from Kleber. The Brazilian striker received the ball from around the halfway line from Jermaine Taylor and dribbled through the Las Vegas defense. Kleber rocketed a right footed shot from outside the box to the top right corner of the goal past Lights goalkeeper Thomas Olsen to give The Bold a 1-0 lead.

Las Vegas Lights FC responded quickly with a Sousa goal in the 23'. After a giveaway deep in the visitors' half, Junior Sandoval played a long through ball to a streaking Sousa on the wing. The Vegas striker snuck in a right footed shot from the rights side of the box to the bottom left corner and drew the match level.

Kleber pulled The Bold back out front in the 31' with his second goal of the night. Xavi Baez played a looping ball into the box from a Sean McFarlane JR throw in. Kleber brought it down, evaded defenders, and slipped in a left footed shot past Olsen.

Lima added to Austin's tally with a 51' goal. McFarlane JR poked the ball off Lights defender Bryan de La Fuente in the visitors' box. Lima pounced on the loose ball and smashed home a right footed attempt to the top right corner.

Kleber completed his hat trick in stoppage time. Sonny Guadarrama found McFarlane JR on an overlapping run. The fullback delivered a cross to an unmarked Kleber at the back post to head home for his fifth goal in two weeks.

Austin Bold FC finished the night with a much needed three points to stay in a USL Championship playoff picture.

After the match, Bold Head Coach Marcelo Serrano spoke of the mental and tactical adjustments made to end Austin's three-game winless streak.

"Against Sacramento, we had 25 shots against five. Against Reno, we had almost 50 crosses. It's about the patience of fixing the goal-scoring efficiency that we didn't have in the last two games. I'll like to congratulate the players tonight. We played a more organized and mature game and scored more goals."

Next Sunday, Austin's Own travel to Providence Park to take on Portland Timbers 2 at 3:00 PM. Watch this match, and every USL Championship match, on ESPN+!