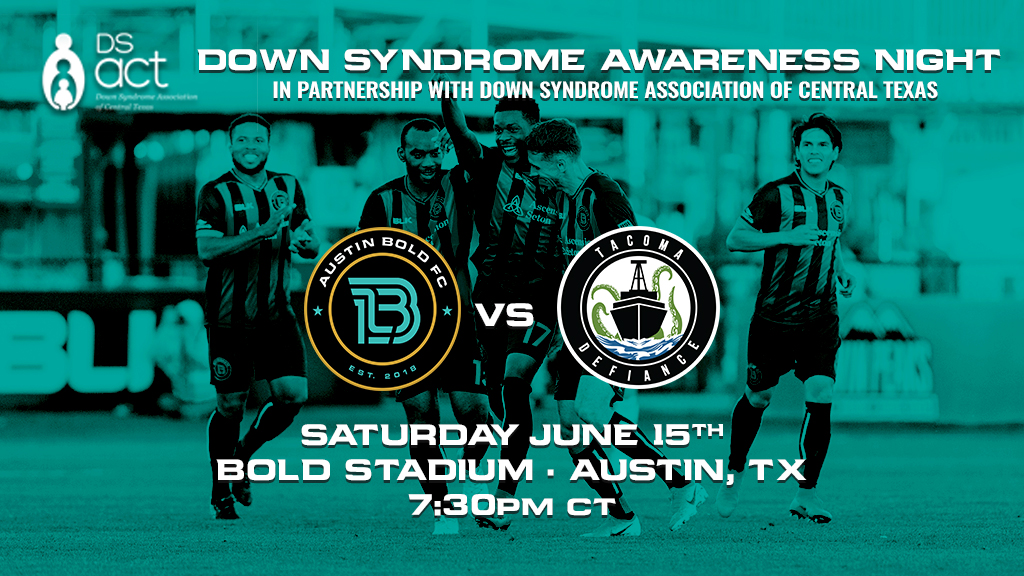 Austin, TX (May 23, 2019) The Down Syndrome Association of Central Texas, providing an array of programs for individuals with Down syndrome and their families throughout Central Texas, is teaming with Austin Bold FC and Bold player Sonny Guadarrama’s Sunshine Soccer of Central Texas for its first-ever soccer camp, to run this coming June 10-12 at Circuit of The Americas.

The partnership between The Bold and DSACT will also include the Bold hosting Down Syndrome Awareness Night for its June 15 match against the Tacoma Defiance at Bold Stadium (9201 Circuit of The Americas Boulevard). DSACT soccer campers, members, and guests will attend the match to help celebrate both the Bold’s inaugural season in the United Soccer League Championship and DSACT’s ongoing work with the Central Texas Down syndrome community throughout its 10-county region.

The camp, for 40 individuals with Down syndrome and siblings ages six and up, is the latest addition to the slate of recreational programming offered by DSACT. It sold out the first day it was offered to members, reflecting Central Texas’s enthusiasm for the beautiful game.

“We’re happy to be offering this camp to our members,” said DSACT executive director Jennifer Edwards. ”We’re especially grateful to Austin Bold FC for its enthusiastic support in partnering with us and hosting us, and for Sonny Guadarrama and Sunshine Soccer of Central Texas for their involvement. Our recreational programming strives to be physically and socially nurturing for all its participants, and we believe this camp will do that this year and in the years to come.”

Edwards also noted, regarding the camp’s inclusivity, “It’s rare to have an adaptive camp that’s also welcoming to siblings, and we’re appreciative of Sunshine Soccer fulfilling our vision for what this camp will be for the families involved.”

“From its inception, Austin Bold FC was built as an inclusive club for every Austinite” commented Austin Bold FC General Manager Roberto Silva. “We want Bold Stadium to be a safe environment for everyone to enjoy themselves and cheer on the Bold without fear of discrimination of any kind. Partnering with Down Syndrome Association of Central Texas continues that mission statement. We’re excited to host DSACT members at Circuit of The Americas for the soccer camps and match.”

Sunshine Soccer of Central Texas, founded in September 2016, specializes in adaptive soccer for children with special needs. According to its Facebook page, the organization seeks to give back to the community “by helping kids with special needs have a chance to learn the game of soccer.” It further explains, “Adaptive soccer will provide an opportunity for youth to move and explore their environment in a safe way, be active using their unique abilities, provide opportunities to youth to interact with peers in a team sport, and allow parents to network within the community.”

The organization was co-founded by Guadarrama, who has returned to his native Austin, after more than a decade playing professionally in Mexico, to be integral to the Bold’s 2019 campaign. Fans can purchase tickets for the game by call the Austin Bold FC sales office at (512) 872-8700 or by visiting here.